In August 2003, we published a letter to the editor that read:

I found the July [2003] cover story about Robert Mugabe’s anti-white Zimbabwe too depressing. I do not think it is helpful to write on and on about whites being beaten, raped, murdered and humiliated by blacks. This only promotes the lie that our situation is hopeless. Also, I don’t like the article’s reference to a time when whites did fight back, when armies from Britain or colonial India would be assembled to face down anti-white despots. This longing for the “good old days” is a sign of having too many old conservatives around. Everything was not better for whites in “the good old days.” Compare white attitudes to Africa now with those of 30 years ago. The tide has turned: whites no longer view despots like Mr. Mugabe with rose-colored glasses.

Now is not the worst of times for whites. White were not safer when white governments in America and the UK were carpet bombing German cities, slaughtering tens of thousands of whites. Also, I grew up on the South Side of Chicago in the ‘60s and ‘70s at a time when the federal government was giving millions to black street gangs like the Blackstone Rangers. I lived through pre-Guiliani New York City — total hell. Life is much better in New York now, also in Chicago. The best news is that whites around the globe are putting aside their foolish differences and starting to close ranks against the Muslims, black Africans, and the Third World.

The whites in Southern Africa are certainly in severe danger. Let’s try to think of ways to help them there or help them escape to new lives in places like Australia, Canada, North Dakota, Russia, Poland etc. It does no good to go on crying and moaning about thugs like Mr. Mugabe and then not act. Let’s build on small victories and aim for big ones. Please, let’s not push the line that the hate-whitey terrorists are winning everywhere and there is nothing we can do to stop them.

The editor of South Africa’s Impact Magazine believes the writer raised some valid points, and offers the following comments:

Various factors explain why attitudes toward Africa have changed over the last 30 years. In the first place, the West has wearied of the destructive antics of black despots, who continue to demand aid; “sympathy fatigue” has set in. Second, after the collapse of the Soviet system, Africa found it could no longer play off the West and the Soviets against each other for influence and aid. Furthermore, for all his Western academic degrees, Mr. Mugabe has brought about probably the most blatantly unjust situation in Africa’s history, causing a socioeconomic catastrophe for his own people as well. Some people say Mr. Mugabe is insane, but he is really just another African upstart in a tight spot, incapable of finding solutions. The most important difference since 30 years ago, however, is that publications like American Renaissance are exposing the truth about Darkest Africa. We at Impact Magazine are doing the same. The Internet has been an additional factor.

One can agree with the letter writer when he says, “Now is not the worst time for whites . . . and the best news is that whites around the globe are putting aside their foolish differences and starting to close ranks against . . . the Third World.” This is indeed true. It is called racial nationalism.

He goes on to write that whites in southern Africa “are certainly in severe danger,” and adds: “Let’s try to think of ways to help them there or help them escape to new lives in places like Australia, Canada, North Dakota.” This is a generous thought, and was tried by a British-South African endeavor called Solidarity some years ago, though with little success.

Those outside southern Africa have little idea of the real circumstances here. Zimbabwe is not totally kaput. There is still some industry and mining — by whites of course. The white farmers have been the hardest hit, but because they remember that it was the British government (in league with Henry Kissinger and the treacherous post-Verwoerd South African government) that sold them out to terrorists like Mr. Mugabe, they are loath to seek refuge in Britain. Most have found safe harbor in neighboring African countries and are starting up farms there. They are holding on to their Zimbabwe land titles, since Mr. Mugabe could be on his way out, and there could be an altogether new game soon. Most South Africans who wanted to leave South Africa have already done so, having found jobs in dozens of other countries. Those who remain are a tough and creative bunch, able to look after themselves. South Africa is several times bigger than Zimbabwe, with many more sub-races. It still has a white population of over 4 million — more than Norway. But here again, it is the white farmers who bear the brunt: 1,400 have been murdered since 1990; they are harassed by rustlers/poachers; hemmed in by government restrictions and taxes; and in some districts threatened with expropriation. But industry is fairly stable and, in spite of government bribery and corruption, the economy is in reasonable shape. Taxes — 95 percent of which are paid by whites and Indians — are onerous, and are resented because most of the revenue goes down the Black Hole.

The quality of life all depends on location. In the Johannesburg/Pretoria area, and in big cities like Durban and Cape Town, crime is bad. But elsewhere, and in most country towns, life is not “hell.” The schools are largely segregated, and where they are not, pupils associate only with their own race. There is a lot of home schooling. Television images of people of different races living together are seldom a reality. At the formerly white universities there have been serious racial incidents in the residences when non-whites have been pushed in. 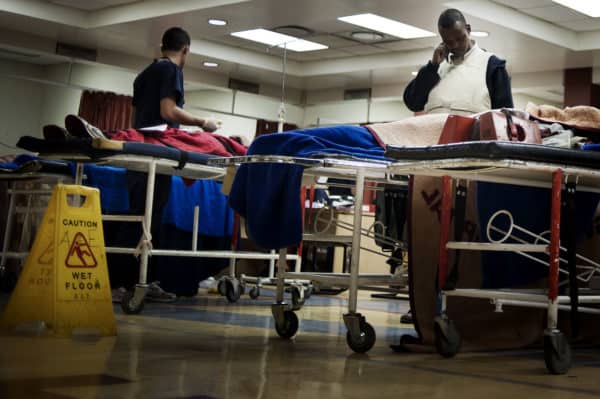 Sept. 16, 2012 – Johannesburg, South Africa – Saturday night at the trauma unit at Baragwanath Hospital in Soweto. This is one of the largest hospitals in the world admitting between 450 and 500 trauma patients every week. About half have been victims of violent crime, explains Peter Anderson, head of the department. (Credit Image: © Kontinent / ZUMAPRESS.com)

The biggest danger here is the creeping Africanization known as “transformation.” Like an aggressive parasite, it is using the structures built by whites and sucking out the energy for its own advantage. This parasite aims gradually to dispossess the creative and innovative founders of this country. And it is here that publications like American Renaissance and Impact (and others around the world) perform their most valuable function. This is the nexus where the enemy, claiming to occupy the moral high ground, is exposed as a thief.

Most of the white South Africans remaining in the country have never forsaken their racial and national integrity. They realize they are more than individuals. And they know that as surely as the sun will rise tomorrow, matters will not remain as they are. Circumstances change, and things are not hopeless. They know that without a stubborn, irrational, heroic streak in their nature they might as well never have been born.